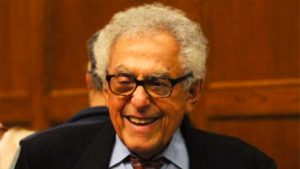 Today, public health genomics is an established and respected field which is integrated into numerous public health programs. This was not the case in the year 2000. CDC had established the Office of Genomics and Precision Public Health two years prior (initially called the Office of Genetics and Disease Prevention), but few people, at that time, understood what the term genomics meant, much less how it could be relevant to public health. Visionary leaders were desperately needed to prove that new pilot, public health genomics programs in states and academia could work.

One of those critical pioneers was Toby Citrin, J.D. of the University of Michigan (UM) School of Public Health who, along with Sharon Kardia Ph.D., UM, proposed, developed and led the first Center for Public Health and Community Genomics (PHCG) beginning in September 2001 through a cooperative agreement between the CDC and the Association of Schools of Public Health.

: a person or group that originates or helps open a new line of thought or activity or a new method or technical development

Toby was not a young man when we first met the UM professor two decades ago, yet he demonstrated remarkable energy for a person of any age. Toby was a passionate champion for public health who, in the late 1970s, chaired the Michigan Governor’s Commission which developed the state’s first Public Health Code; his activities led to a second state commission that developed Michigan’s model genetic privacy and consent laws in the late 1990s. Toby’s leadership role in academia was also not his first career. Among other pursuits, the 1959 Harvard graduate and attorney had been a highly successful entrepreneur of a health care supply business. With a proven eye for health and technology trends, Toby used that same insight to see the potential of public health genomics – not for profit but for the potential to improve the lives of many.

Much of Toby’s work in genomics focused on the need to ensure that the new science and technology would improve and not worsen health disparities. His passion was important in helping to establish formative ethical, legal, and societal implications (ELSI) frameworks which helped pave the way for present day human genomics research and practice. He also worked to establish UM’s Communities of Color and Genetics Policy project which has served as a model example for how to introduce genomics to underserved communities in an equitable and beneficial manner.

Toby and the PHCG he co-led, also provided critical support to several CDC-funded model genomics state programs that were working to integrate genomics into health departments for the first time. Part of this work involved Toby’s own innovative approach to genomics education including the launch of UM’s “Six Weeks to Genomics Awareness” in partnership with CDC, the first online training resource on public health genomics. He also worked to bring awareness of the health effects of genetics and the environment to K-12 schools and their surrounding communities across Michigan. In addition, Toby was a key partner in the success of the four National Conferences on Genomics and Public Health. Toby remained influential in public health genomics as the field grew. In 2011-2012, he led community and partner engagement activities to garner critical feedback for the development of a new five year plan for the field as well as a conference and report: New Strategies in Public Health Genomics: Actions to Save Lives Now. Toby was also instrumental in the creation of two American Public Health Association bodies – the Genomics Forum and the Community-Based Public Health Caucus.

When Toby passed away in January of this year, we reflected on what he had accomplished in his remarkable life. However, what we remember first about him was his mile-wide grin and the warmth with which he greeted those around him. His hospitality, generosity, and encouragement were truly genuine, and no doubt his love of people helped propel his lifetime of success. Brilliant entrepreneur, visionary, advocate for the underserved, public health genomics champion – Toby was all of these things, but most of all… he was our dear friend.

Thank you. I had the pleasure of working with Toby for 21 years. The article above represents Toby’s incredible gift to the professional world. It would have been perfect if it could have allowed a final sentence that while he did so very much for the world of public health, he was also a dedicated family man.