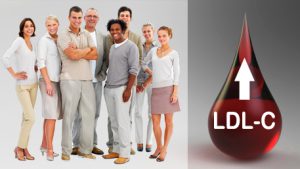 People with the genetic disorder familial hypercholesterolemia (FH) have increased blood levels of low-density lipoprotein (LDL) cholesterol, which increases their risk for developing coronary artery disease or having a heart attack. A recent study using data from the FH Foundation’s CASCADE FH Registry suggests that many individuals with FH are not meeting blood LDL-cholesterol level targets and continue to have cardiovascular events, even after treatment with cholesterol-lowering medications. In the study of 1,900 adults with FH and seen in lipid specialty clinics, researchers examined blood LDL-cholesterol levels over an average of 20 months and found that more than half had an LDL-cholesterol level ≥100 mg/dL, placing them at high risk for heart attacks or strokes in the future.

Factors associated with achieving LDL cholesterol <100 mg/dL included use of high intensity statins, more cholesterol-lowering medications at enrollment, and PCSK9 inhibitors. Use of one of the newer therapies, PCSK9 inhibitors, resulted in a 2.8-fold greater decrease in LDL-cholesterol levels. However, less than one-third of participants took this drug, and the study authors reported that many patients had difficulty obtaining insurance authorization for it.

CASCADE FH Registry participants had high rates of pre-existing and incident atherosclerotic cardiovascular disease (ASCVD), demonstrating the impact of FH patients’ lifelong exposure to high blood cholesterol. Despite being more likely to achieve LDL-cholesterol levels <100 mg/dL, those with prior ASCVD were almost six times more likely to have a recurrent ASCVD event, defined by the study authors as myocardial infarction, coronary revascularization, stroke, or transient ischemic attack (TIA). The study authors estimated that over a ten-year period, 46% of those with ASCVD and 10% of those without ASCVD will have an ASCVD event.

The study showed some progress in lowering cholesterol levels. The mean pre-treatment LDL-cholesterol level was 249 mg/dL, and the proportion of participants with LDL-cholesterol >200 mg/dL decreased by 60%. However, the study highlighted how opportunities in detection and treatment of FH are being missed. Earlier identification of those with FH is needed—on average, study participants were not diagnosed until age 50 and often only after the onset of ASCVD. While almost all participants (93%) took cholesterol-lowering medications at enrollment, statin use was not universal – 73.7% of patients were on statins, which are considered an essential part of FH treatment. Even among the study population, which was selected from specialty clinics and likely receiving more aggressive cholesterol-lowering therapies than the general FH population, only 48% achieved LDL-cholesterol <100 mg/dL, and only 22% reached LDL-cholesterol <70 mg/dL. Participants who had ASCVD events during the follow-up period were more likely to have hypertension and diabetes, heart disease risk factors that could be addressed.

While recommendations focused on familial hypercholesterolemia include target LDL-cholesterol levels, the current AHA/ACC guideline on the management of blood cholesterol does not, although it uses LDL ≥70 mg/dL and LDL ≥100 mg/dL as thresholds to guide treatment. For example, it recommends consideration of treatment with PCSK9 inhibitors for individuals ages 30-75 with FH who have LDL-cholesterol >100 mg/dL while taking statins and ezetimibe. The study authors proposed designating FH as an ASCVD risk equivalent. The AHA/ACC guideline does not include the concept of risk-equivalent conditions, but it lists familial hypercholesterolemia as a high-risk condition, along with other conditions traditionally considered ASCVD risk equivalents, such as diabetes and chronic kidney disease.

Ideally, people with FH would be identified early and provided aggressive treatment to lower their LDL-cholesterol to healthy levels before they have ASCVD, resulting in improved cardiovascular outcomes. Taking steps to address heart disease risk factors, such as hypertension, diabetes, and smoking, might be especially important for people with FH. Multiple approaches are needed, including patient and provider education to increase awareness of FH, studies to better understand optimal LDL- cholesterol levels in those with and without ASCVD and how to achieve these levels, improved access to effective interventions, and continued tracking of LDL- cholesterol levels and health outcomes in response to treatments.