Lack of Knowledge of Natural History of New Biomarkers: The Achilles’ Heel of Precision Health!

Posted on May 23, 2019 by Muin J. Khoury, Office of Public Health Genomics, Centers for Disease Control and Prevention, Atlanta, Georgia 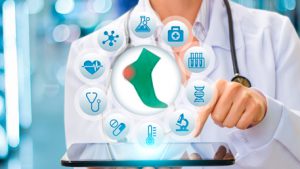 In Greek mythology, when Achilles was a baby, it was foretold that he would die young. To prevent his death, his mother dipped his body in the River Styx, which was supposed to offer powers of invulnerability. However, as she held the baby by the heel, the heel did not come into contact with the river water. As an adult, he was killed by a poisonous arrow that lodged in his heel. Today, we use the term “Achilles heel” as an expression to mean “area of weakness, vulnerable spot.”

Can this analogy serve as a reminder of the vulnerability of today’s world of precision health? Emerging biomarkers derived from genomics, and other “omic” fields are increasingly promoted as a way to maintain health and prevent disease. An increasing number of studies have followed people longitudinally with measurements of tens of thousands of biomarkers. Enthusiasts are predicting that “one day doctors won’t just take your blood pressure and check your temperature. They will scrutinize your genome for risk factors and track tens of thousands of molecules active in your body. By doing so, the doctors of the future will identify diseases, and treat them, long before symptoms appear.”

Nevertheless, this approach could pose an immediate challenge to the practice of preventive medicine and health promotion. The absence of data on the “natural history” of the thousands of biomarkers can be the “Achilles heel” of precision health. We simply do not understand the natural change and evolution of most new biomarkers promoted for use in health maintenance. In other words, we do not know if longitudinal changes in values can be used to establish thresholds for safe and effective action, such as medical or other interventions for early detection and treatment. In the absence of randomized trials, recent observational studies in motivated healthy volunteers will not be enough to change clinical practice. Critics even say that this approach “will never be cost-effective and will instead lead to wild overtreatment of anxious patients.”

Two recent studies illustrate the big challenge that lies ahead.

The first study explored the ability of deep longitudinal profiling to identify clinically relevant molecular pathways and affect behavior in a longitudinal cohort of 109 subjects enriched for risk of type 2 diabetes mellitus. Subjects underwent personalized omics profiling quarterly for up to 8 years using traditional clinical measures and emerging biomarkers including genome, immunome, transcriptome, proteome, metabolome, microbiome and wearable monitoring. The authors discovered that in about half the subjects there were clinically actionable health discoveries and identified multiple molecular pathways associated with metabolic, cardiovascular and oncologic pathophysiology.

The second study was based on in 2531 participants enrolled in a commercial “Scientific Wellness” program that combines multi-omic data with personalized, telephonic lifestyle coaching. The authors examined the impact of this program on 55 clinical markers and the effect of genetic predisposition on these clinical changes. They identified improvements in clinical markers related to cardiometabolic risk, inflammation, nutrition, and anthropometrics. They suggested that “a program combining multi-omic data with lifestyle coaching produces clinically meaningful improvements, and that genetic predisposition impacts clinical responses to lifestyle change.”

These two studies could be viewed as “proof of concept” but would not change current health promotion and disease prevention efforts. While longitudinal profiling of individuals can detect subtle changes in health status and can allow initiation of disease-prevention strategies, the main problem is that “a great deal of work is still needed to determine what parameters should be monitored and how frequently this should occur for a meaningful longitudinal study.” In other words, subtle omic perturbations over time may or may not warrant any interventions.

Understanding natural history of any disease, and the transition from health to disease is a major factor to consider before adopting population screening. This is especially pertinent in the era of genomics and precision medicine. A main unanswered question for emerging biomarkers is whether interventions will change disease natural history, and can lead to early effective disease prevention efforts.

There is an urgent need to evaluate new genomics and precision health biomarkers in large scale longitudinal population studies such as the UK Biobank, and the US All of Us Research initiative. Validated biomarkers that emerge from such studies will have to be carefully studied for their clinical utility as well as their costs, acceptability and potential ethical, social and economic implications.

In the meantime, we should not be in hurry to promote the use of emerging biomarkers for use in routine practice. Premature use of such information can be a major threat to precision health and may lead to the downfall of this young and fledgling field.