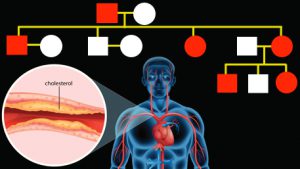 For several years I have pondered what should or could be the state public health agency role in addressing FH. Most of my public health genetics colleagues were actively working on other CDC-labeled tier 1 conditions, such as Lynch syndrome (LS) and Hereditary Breast and Ovarian Cancer syndrome (HBOC). While few, if any, of my fellow state genetics coordinators or heart disease programs were even considering FH. Why was that? For one, the United States Preventive Services Task Force (USPSTF) as recently as 2016 has found insufficient evidence to support screening for FH and other lipid disorders under age 20 years. At the same time the USPSTF has issued a positive recommendation for genetic testing for HBOC.

Would FH meet criteria for newborn screening? We often justify population-based screening because the conditions are so rare that the average clinician would not diagnose the condition until it resulted in illness or death. Unless data demonstrate that by having this genetic condition present at birth, the elevated cholesterol impacts the infant’s life in the newborn period then it is not likely a good candidate for newborn screening.

Can FH be considered as a notifiable condition, such as Zika virus, HIV, or rabies? While such reporting may make the process of cascade screening more feasible in the public health sector, given the fact that so few people are being diagnosed, the notifiable conditions approach would likely not be impactful. Significant efforts would be necessary first to increase awareness, train, and retrain primary care providers about identifying and treating FH. I would also be wary of imposing any negative stigma o people with FH just because it is placed on a notifiable conditions list.

In 2010, the American Academy of Pediatrics recommended that children (age 9 to 11) be screened for cholesterol. In Washington State, 100% of health systems and over 98% of healthcare practitioners have electronic medical records. This prompted an idea: why not ask the health systems to pull their data and promote screening and follow-up of all 9-11 year-olds that don’t have lipid profiles on record? This would include cascade screening if a diagnosis of FH is made, of anyone with a LDL cholesterol of greater than 190mg/dl. Working with our heart disease program, and children and youth with special health care needs program, I pitched the idea state-wide and on a national webinar. One health system agreed to try and pilot this approach. It turned out that less than 2% of 9-11 year-olds in their system had a lipid profile on record.

This year, while attending the global FH Summit, I heard that Kaiser Permanente in Southern California is also implementing a pilot program. As I understand it, they are using the electronic medical records of adults (age 20 and above) with cholesterol level at or above 240 mg/dl (99.5% chance of FH). Kaiser is also encouraging individuals (age 20 and above) who do not have a lipid profile to be screened. For those identified with these high LDL levels, they are actively encouraging that they meet with a cardiologist. Because Kaiser is actively looking for those at greatest risk, they have already averted some myocardial infarctions. They are doing this work clinically within a closed system, but, perhaps the public health role could be to promote similar strategies.

Throughout the FH Summit, I heard repeatedly from speakers, and attendees, that they believe an overall awareness campaign is needed – for the general population which would include healthcare providers. I think this a great opportunity for a private-public partnership that could be a win-win for all.

Finally, as public health practitioners grapple with what our role in FH should be, it would be ideal to have a regular forum, for those interested in planning for, or implementing, new FH strategies to share and benefit from the ideas of others.

I encourage readers to submit their comments about developing and implementing a public health strategy for reducing the burden of FH in the United States.