Familial Hypercholesterolemia is Common and Undertreated in the United States 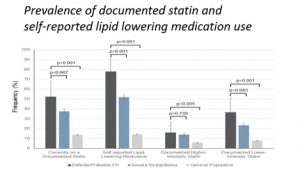 Familial hypercholesterolemia (FH) is an autosomal dominant genetic disorder that significantly increases the risk of atherosclerotic cardiovascular disease and premature deaths from heart attacks and stroke. The national prevalence of FH and rates of screening, awareness, and treatment with statins among individuals with FH and other causes of high lipid levels (dyslipidemias) remain largely unknown.

In this nationally representative sample of the U.S. adult population, we observed a large disconnect between screening and treatment rates in adults with definite/probable FH or severe dyslipidemia. In spite of high rates of cholesterol screening and awareness, only about half of adults with definite/probable FH are on statin therapy, and even fewer are prescribed a high-intensity statin; young and uninsured patients are at the highest risk for under treatment. One explanation for overall low statin rates may be due to lower screening rates in certain populations (e.g. younger and uninsured adults), but the disconnect between screening and treatment rates was most pronounced in these populations. Young adults may be at particularly high-risk of undertreatment given their lower rates of insurance and usual source of care. Clinicians may be less likely to initiate statin therapy in this population. Other explanations for the statin use may include statin intolerance or interactions with other medications; however, studies have shown that statin intolerance accounts for only a small percentage of adults with FH not taking statins. Lack of continuity of care likely explains some portion of the poor treatment rates. However, rates of statin use remained low even among the insured patients, or those who had a usual source of care, suggesting that other factors besides inadequate follow-up contribute to suboptimal treatment rates.

In summary, this study highlights a public health opportunity and an imperative to improve statin treatment rates in individuals with FH and other dyslipidemias. Younger and uninsured adults with severe dyslipidemia in addition to those without a usual source of care are significantly less likely to be prescribed statins, highlighting the need for community-based interventions to target these adults with limited access to care. In addition, cascade screening and the use of genetic testing in relatives of affected individuals is an unmet need, can save lives and is cost-effective.