The National ALS Registry is more than counting cases

Posted on December 4, 2018 by Blog Administrator 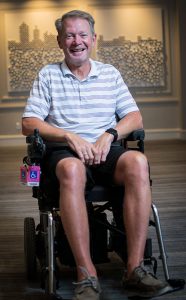 Amyotrophic lateral sclerosis (ALS), also known as Lou Gehrig’s disease, is a progressive and fatal disease, attacking neurons that control voluntary movement. These neurons die over time. The result is the gradual loss of muscle movement, speech, swallowing, and eventually breathing. Unfortunately, people with ALS usually have a shortened lifespan and may die within a few years of diagnosis.

(Similar to many public health reports, the Registry may not reflect conditions in the current year because the process of collecting, analyzing, and certifying data takes time.)

National ALS Registry data are used to better understand patterns of ALS across the country, as they look at how patients might be distributed in the U.S., researchers look for similarities and may ask key questions, such as: 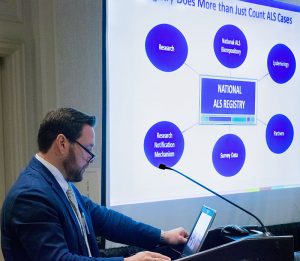 The National Registry helps to show patterns of ALS across the country—for example, patients in New Jersey might be similar to those in Iowa. Researchers can then try to identify any similarities among these patients.

Being able to monitor the epidemiology—how the disease is mapped and what characteristics patients may share—is critical to identifying possible causes and improving the treatment and prevention of ALS.

The National ALS Biorepository, an expanded part of the National Registry, uses physical specimens for research: blood, urine, hair, saliva, etc.. These samples can be matched with risk factor surveys from the Registry database, opening up new ways for researchers to discover ALS causes and patterns.

The quest for a better understanding of the causes of this terrible disease motivates both patients and researchers to contribute time and energy to research. One patient recently told the National ALS Registry staff, “I joined the Registry and contributed my information not just for me, but because I really hope that I could help keep someone else from suffering in the future.”

The National ALS Registry and Biorepository data are helping to move that needle of hope forward.