I have fond childhood memories of spending Saturdays riding my bike purposefully through my neighborhood. 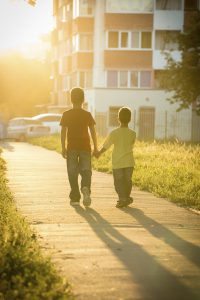 There was nothing better than a sunny day that created the canvas for the perfect adventure-stopping at the library to check out a new book, getting a fresh pastry from the local bakery, and venturing across the neighborhood to walk my bike up “the big hill” just to enjoy the swift ride back down. Carefree experiences like this knit together the tapestry of my youth. I was fortunate not to have to worry about violence in my home or outside my doorstep. I did not worry about encountering or witnessing fights or gun violence in my community. Fear of my surroundings did not hamper my Saturday adventures. I know too well that this freedom was a privilege that is not afforded to every child. Although my neighborhood and home environments protected me from many harsh realities, I would eventually experience the impact of violence within my broader community.

For the past ten years, I have been mentoring Risa,* a girl I met when she was four years old. Her mother, a single parent, often needed help getting on her feet as she parented Risa and her siblings. Risa’s father, an African American male, had been murdered in a gun-violence incident when Risa was just a toddler. Observing the struggles that Risa and her family continue to face, I wonder how different their lives might be had her father’s life not been so tragically cut short. When he died he was in the demographic most at risk for homicide in the U.S.–African American males between the ages of 18-34. In 2016, non-Hispanic African American males were over ten times as likely to die by homicide compared with non-Hispanic White males.1 This disparity is born out of inequities such as poverty, neighborhood disadvantage, and racism.2-4 Furthermore, this disparity perpetuates these same inequities for children like Risa who live amidst these conditions and are expected to thrive.

Unfortunately, Risa and her family are not the only people I know who have been critically impacted by violence. In the span of just a few years, two young African American women in my life have died as a result of intimate partner violence. Both women were vibrant, energetic spirits who brought joy to their communities and had bright futures ahead of them. Despite the great promise they embodied, the chances of reaching their potential were limited by a disproportionately high risk of homicide. Like African American males, African American females are also amongst groups at highest risk for homicide.5

The reality of violence contrasts boldly with the carefree days of my youth. I was fortunate. There are many others who were also fortunate, but so many more who were not and are not beneficiaries of the simple privilege of safety. Many African Americans are burdened daily with the harmful, multi-layered impact of violence, whether directly or indirectly. Too many of us are subject to a cycle of violence, grief, and loss that is embedded in conditions of injustice and a context of perpetual vigilance. The legacy of violence is individual and collective physical and psychological trauma that is passed down through generations, along with the burden of structural inequity.

Strategies presented in these technical packages include initiatives to reduce structural inequities (e.g., strengthening household financial security) and promote safe, stable, and nurturing environments (e.g., mentoring programs) in efforts to prevent violence. DVP recently released a video on Adverse Childhood Experiences (ACEs) with strategies on how communities can help prevent them. ACEs have a tremendous impact on future violence victimization and perpetration, and lifelong health and opportunities.
The impact of violence is far-reaching, and solutions to address it have to be just as widespread. Fortunately, the field has learned a lot about what works to prevent violence. There are important actions that can be taken to reduce risk for violence and help eliminate disparities.

Specifically from where you sit in your professional and personal roles, what do you see as the most promising and impactful place to start as far as eliminating disparities in violence?

Special thanks to Dr. Sheats for contributing this blog in recognition of National Safety Month and as part of the celebration of the 30th anniversary commemoration of CDC’s Office of Minority Health and Health Equity. Our theme for the 30th anniversary commemoration is Mission: Possible. We believe “healthy lives for everyone” is possible and a goal that resonates in public health.

3 comments on “Mission Possible: Too Heavy a Burden: Thoughts on the Impact of Violence Disparities Experienced by African Americans”

As a society we have a responsibility to all children – to protect them, to guide them and to ensure their rights are protected. This goes beyond indivualism. I am pleased to see the advancement of our understanding of the impacts of adverse childhood experiences and to demonstrate how they are linked to future health and scoocal outcomes. While there is common sense in this, we need to continue the dialogue to denormalize childhood hardships and violence, and to ensure that people see this violence as horrific and enduring as it is.

As a society we have a responsibility to all children – to protect them, to guide them and to ensure their rights are protected. This goes beyond indivualism. I am pleased to see the advancement of our understanding of the impacts of adverse childhood experiences and to demonstrate how they are linked to future health and scoocal outcomes.

Thanks for the blog… As a person we have the responsibility to take care of the children to guide them and protect them. I am greatful to see the advancement of our understanding of the impacts of adverse childhood experiences and to demonstrate how they are linked to future health and scoocal outcomes.