One in five employed U.S. adult nonsmokers are exposed to secondhand smoke at work, and exposure is higher among certain racial and ethnic groups, including American Indians/Alaska Natives. Wouldn’t it be great if all American employees enjoyed a smokefree workplace? I often think about this as director of CDC’s Office on Smoking and Health. At CDC—a completely tobacco free campus—I have the privilege of leading an office committed to teaching people about the harmful effects of cigarette smoking and exposure to secondhand smoke. From a more personal perspective, as a mother, I feel the responsibility to protect my kids and all kids from exposure to secondhand smoke. Everyone deserves the right to breathe clean air.

Secondhand smoke exposure occurs when nonsmokers breathe in smoke exhaled by smokers or smoke from the burning end of tobacco products. Secondhand smoke contains deadly chemicals that can cause heart disease and lung cancer in nonsmoking adults, as well as respiratory illness, ear infections, and asthma attacks in kids. It kills more than 400 infants and 41,000 adult nonsmokers every year. The Surgeon General has concluded that there is no risk-free level of exposure to secondhand smoke.

One of the ways we’re teaching people about how harmful secondhand smoke exposure can be is through the Tips from Former Smokers® campaign. Even before I came to CDC’s Office on Smoking, I had seen the compelling ads on television. The campaign features real people with serious long-term health effects from smoking and secondhand smoke exposure. The story of Nathan, a Tips® campaign participant and member of the Oglala Sioux tribe, stands out as an example of how secondhand smoke can be harmful to your health in the workplace. Nathan worked for 11 years in casinos that allowed smoking, but he never smoked cigarettes himself. But he breathed in secondhand smoke every day on the job. According to one of his doctors, his lungs looked like those of a heavy smoker.

Too many people like Nathan suffer because of cigarette smoking and secondhand smoke, especially minorities and people of color. Native Americans have one of the highest rates of cigarette smoking of any racial and ethnic groups, and African Americans are exposed to secondhand smoke more than other racial and ethnic groups. At the same time, some groups are less likely to be covered by smokefree laws in work sites, restaurants, and bars, including people with lower income and lower education. 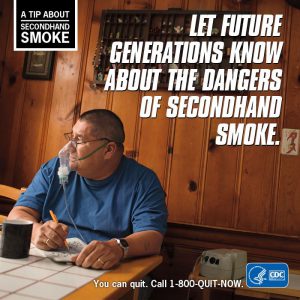 Nathan became a true champion of smokefree environments, emphasizing that “when you smoke, it affects more than just your health.” In addition to his participation in the Tips campaign, he spoke at schools, Pow-Wows, and conferences as much as his health allowed. He urged teens not to start smoking, and if they did, to quit. He encouraged everyone to protect children from secondhand smoke. Nathan’s picture hangs on the wall in our office, so every day at work I am reminded of what we can do to end smoking-related health disparities, including reducing exposure to secondhand smoke.

Most exposure to secondhand smoke occurs in homes and workplaces. But we can all make small changes that make big differences in the lives of people around us—by not allowing anyone to smoke in our homes or cars, making sure our children’s day care centers and schools are tobacco-free, and seeking out restaurants and other places that do not allow smoking. Employers can establish smokefree policies on their properties. Employers can also provide all employees and their dependents with health insurance that covers support for quitting, without a copayment.

The secondhand smoke Nathan was exposed to in his workplace triggered asthma attacks, eye irritation, headaches, sinus infections, and bronchitis and eventually caused permanent lung damage that led to his death in October 2013. He was only 54 years old. It makes me sad to think that there was so much we could have done as a nation to prevent Nathan’s death. Fortunately, we can continue to honor his life and his legacy in a positive way—as Nathan himself said, to “let future generations know the dangers of secondhand smoke.”

If you would like additional free resources to help your workplace go tobacco free, visit CDC’s Foundation Tobacco Use: A Threat to Workplace Health and Productivity website.

Special thanks to Dr. Graffunder for contributing this blog in 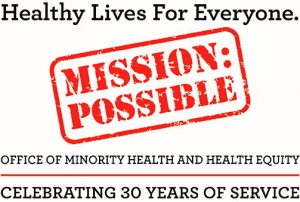 3 comments on “Mission Possible: Protect Yourself From Secondhand Smoke”

I love my part time job at a casino, but I must quit due to being a former smoker and the effects of second hand smoke on my heart and lungs. I quit smoking 20 yrs ago but am still affected by others smoke. Non smoking needs to go viral in all indoor establishments.

Why are white heterosexual and poor whites excluded from attaining information? We are now in a minority class that is being prejudiced. I am truly offended by the CDC excluding my race gender and class.