Conversations with Authors: The Annual Report to the Nation

Jane Henley, MSPH
Contributing Author of the Annual Report to the Nation

What is the Annual Report to the Nation? 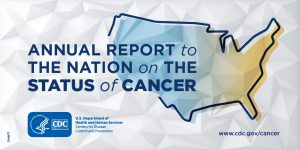 Since 1998, the Annual Report to the Nation has provided a yearly status report on cancer. We give an update of rates for new cases and deaths, as well as trends for the most common cancers in the United States. The report is a collaborative effort among the Centers for Disease Control and Prevention, the National Cancer Institute (part of the National Institutes of Health), the American Cancer Society, and the North American Association of Central Cancer Registries.

What was most notable from this report?

We found that for all cancer sites combined, cancer death rates declined from 2001 to 2017. These decreases were seen in all major racial and ethnic groups and among men, women, adolescents, young adults, and children.

What do you think is the biggest contributing factor to the overall cancer death rate decline?

Lung cancer accounts for about a quarter of all cancer deaths, and we’ve seen big drops in lung cancer death rates, because treatments are more targeted and because fewer people are smoking. Cigarette smoking contributes to the development of many lung cancers and can also be linked to cancers throughout the body.

So, cancer deaths rates are going down. Does this mean that fewer people are getting cancer?

Not necessarily. While we saw that death rates declined, rates of new cancer diagnoses (incidence rates) remained stable in men and increased in women. This could mean that better screening and early diagnoses led to fewer deaths, along with better treatment options available. We saw that cancer incidence rates increased for several cancers related to obesity, including breast, liver, pancreatic, and uterine cancer. 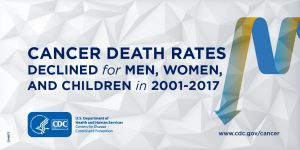 For the first time, the report provided rates and trends for the most common cancers among children (aged 0-14 years) and adolescents and young adults aged 15 to 39 years. What do the data tell us about cancer in young people?

Each year the report features a special section; this year, you looked at progress towards meeting cancer-related Healthy People 2020 objectives. Can you tell us more about this?

Healthy People is a national initiative that provides goals for improving the health of all Americans. We’re just finishing up Healthy People 2020, and planning has begun for Healthy People 2030. This special section looked at progress toward meeting goals related to 4 common cancers (lung, colorectal, female breast, and prostate), which make up almost half of all cancer deaths. We looked at progress toward meeting objectives for death rates, cancer screening, and major risk factors. We found that we met the objectives for reducing cancer death rates overall, but not in some groups. For example, the objective for overall cancer death rate (161 deaths per 100,000) wasn’t met yet among males, black Americans, or people who lived in rural areas.

We also found that improvement is needed to meet objectives related to increasing cancer screening, smoking cessation, and physical activity and reducing cigarette smoking, secondhand smoke exposure, obesity, and excessive alcohol use. Cancer screening is below where it should be, and there are stark disparities. For example, 77% of women with private health insurance were screened for breast cancer, which is still below the target of 81%, but much higher than women who don’t have health insurance (35%) – and mammography is a service that is provided at no cost by most insurers. We also saw differences in risk factors; but in some cases, even though the target wasn’t met yet, there were improvements. For example, recent smoking cessation success was low among black Americans (6.9% was lower than the 8% target), but this more than doubled from the baseline in 2008 (3.1%).

Is there a “call-to-action” or any next steps in terms of what can be done with the information in the Annual Report to the Nation?

Based on the results from many studies, we know there are interventions that are proven to reduce cancer risk factors and promote healthy behaviors. However, they may not be applied the same way in every community; for example, not all communities are protected by strong smoke-free laws. Or they may not work well in every community; for example, it may not be possible for children in rural areas to walk to school. We can help communities find and implement cancer prevention and control interventions that are sustainable, focused, and culturally appropriate. Doing this can help all Americans access a path to long, healthy, cancer-free lives.

Posted on Thursday, March 12, 2020 by DCPC
Categories Other