Martin Luther King Jr. and Environmental Justice: A Leader Ahead of His Time

Posted on January 11, 2022 by Blog Administrator

Every year we celebrate the legacy of Dr. Martin Luther King Jr. and his work toward social justice, civil liberties, and equal rights for all. His actions, including civil disobedience and passive resistance, led to widely known legal achievements such as the Civil Rights Act of 1964 and the Voting Rights Act of 1965. Might these actions also include recognition of health as a human right and thus point to Dr. King as one of the earliest leaders of what we now call environmental justice?

When we look at the environmental justice movement today, the same social justice and rights Dr. King defended are fundamental in the movement’s focus on the fair treatment and meaningful involvement of individuals in society. Environmental justice seeks to achieve two important goals: fair treatment and meaningful involvement of all people regardless of race, color, national origin, or income with respect to the development, implementation, and enforcement of environmental laws, regulations, and policies. In short, everyone should be entitled to the same degree of protection from environmental and health hazards and be allowed equal access to the decision-making process to have a healthy environment in which to live, learn, and work. 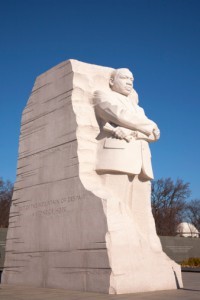 Dr. King’s protest against poor housing conditions in Chicago in 1966 and his strike in 1968 against unfavorable sanitation conditions in Memphis, Tennessee, might have helped plant the seeds for what is now our nation’s environmental justice movement. Dr. King’s advocacy actions line up with the ways the National Center for Environmental Health/Agency for Toxic Substances and Disease Registry (NCEH/ATSDR) works toward equality in the context of environmental health and health disparities through our various activities and initiatives. NCEH/ATSDR continues to support environmental justice by working with communities; environmental groups; tribal governments; and local, state, and other federal agencies to address environmental health-related issues through programs such as

“All labor that uplifts humanity has dignity and importance and should be undertaken with painstaking excellence.”