A Back to Basics Approach to Prevent Infection 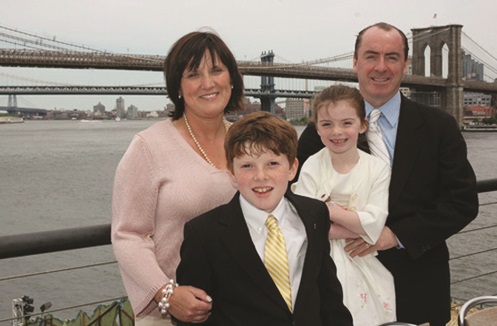 A Back to Basics Approach to Prevent Infection

It was hard to see it happen. We were watching a friend’s basketball game when the young boy fell down and began to bleed from a cut on his arm. The referee sent him out of the game and over to his coach who took out a bandage and slapped it on the wound without cleaning the cut. Calling a time-out, the coach put the boy back in the game.

My daughter and I looked at each other in disbelief.  My son, her brother, Rory, had fallen playing basketball in 2012. The gym teacher had applied a bandage without cleaning the wound. Despite us bringing him to his pediatrician and hospital when he began to feel ill, Rory died from septic shock four days later. The source of the infection that ravaged his body is believed to be from the scrape on his arm.

At the Foundation we set up in his name, the Rory Staunton Foundation for Sepsis Prevention (www.rorystauntonfoundationforsepsis.org), we believe in the importance of a ‘back to basics’ approach to preventing infection (including the critical importance of the simple act of washing hands), understanding the risks and signs of sepsis, and taking responsibility for educating others about infection and sepsis by devising public health awareness campaigns.

In September 2017 the Foundation, in collaboration with the American Federation of Teachers (AFT) and at the request of New York State’s Departments of Health and Education, produced the nation’s first comprehensive K-12 sepsis education curriculum. Every school in the state has access to the curriculum; its lessons are designed to educate students about the importance of a ‘back to basics’ approach to preventing infection. Starting in kindergarten, the lessons progressively educate young people about wound care, hand washing and the signs and science of sepsis and infection and show students how to become public health advocated in their communities. In November 2017, Governor Cuomo signed Rory Staunton’s Law, requiring all New York schools to receive sepsis education resources, free of charge.

We believe in the need for back to basics health care in our community. We know that the simplest acts–washing hands, and cleaning even minor wounds–will prevent infection. Our goal is to ensure that every child grows up to understand the importance of these fundamental healthcare principles.

Rory’s Mom and Co-Founder of the Rory Staunton Foundation
Orlaith was the Executive Director of USIT, an International Student Work and Travel Program and left her job there in 1999 when Rory and later his little sister Kathleen were born. During this time she became actively involved in the family restaurant business and led committees establishing after school programs and fundraising programs at the school where Rory and Kathleen attended. Having spent several years working in the publishing industry she now writes the website blog and Facebook posts. She is a passionate and driven voice for change in the world so that everyone knows about sepsis. Orlaith wants no other family to experience the devastating loss that her family has experienced.

9 comments on “A Back to Basics Approach to Prevent Infection”

Rory’s story is very sad but it can be learned from. I think it is very important that individuals and medical providers understand that sepsis can start out from what appear to be a simple skin injury. In Rory’s case it was a scrape on the knee. When skin injuries become infected and the infection spreads out from the wound it is cellulitis which can cause sepsis.

It is important to carry a small tube or spray of antibiotic so you can stop the infection before it gets established. It should be applied immediately to the slightest breach of the skin and then the skin should be watched for a spread of infection,

This site makes it very clear that sepsis can set in quickly so act quickly if it looks like cellulitis.

One of the Emergency Department doctors thought my skin injury was minor and sent me home. The next day he had to admit me because infection had spread and it was then a clear case of cellulitis. I had previously had severe sepsis from another skin injury.

im using this for a school project

As a student nurse, I want to thank you for sharing your story so that we may be able to identify sepsis in our own patients. I cannot tell you how sorry I am for the loss of your son, Rory. His eyes tell a story of the joy I’m certain he brought to your lives. ❤

Before having sepsis the first time I had never heard of it. While in the hospital being treated for severe pneumonia I kept hearing I had sepsis but no one explained what I had, probably so I would not freak out. Now I have Common Variable Immunodeficiency, one of the worst cases the doctor has ever seen. Hand washing is an essential part of every day for me. I also have Diabetes II so I am checking my skin on a regular basis.
Your sharing has helped me keep all of this in perspective. I am saddened your son was treated with such ignorance,but now there is hope. I will be writing to my senator and congressman about what New York did to have it here in Kentucky. I will also be contacting our legislators and Teacher’s Union. I’m not done. My eldest son teaches in a middle school in West Virginia. Thank you so much.

So sorry to hear about your losss, but hope that your response from your grief saves others from having to grieve the same loss. Thank you for your efforts!

Your information is very interesting. Thank you for sharing

You have shared the valuable information, I would say a much needed after reading the sad reason behind your writing. It’s sad that the infection becomes the reason for someone’s death. I really appreciate the back to basics approach and would like to forward the message to the other people as many as possible.

Hi Beverly, thanks so much for sharing your experience. We are so glad to hear you are doing well. Sepsis is indeed life-threatening, which is why timely treatment is so important. Unfortunately, it is not possible to know how many deaths are from undiagnosed cases, as there is no confirmatory sepsis diagnostic test. However, healthcare professionals can now begin to identify patients at risk for sepsis through evidence of infection and organ dysfunction and start to track those patients. We hope to have more specific data in the future. We hope that helps.

I survived three bouts of sepsis but mine were caused by bacterial pneumonia. Thank you for educating the public as sepsis is deadly in more than 50 percent of the diagnosed cases. How many deaths are from undiagnosed cases?