Today is Save Your Hearing Day.  For workers and others who are exposed to dangerously loud noises which cannot be reduced or eliminated, hearing protection devices (HPDs) are absolutely necessary to save their hearing.  But if HPDs are not properly selected or correctly worn, the devices may not block out enough noise and the wearer may still risk a loss of hearing.  How can a person tell if their HPDs are fit correctly?  A new development from NIOSH – HPD Well-FitTM – can quickly and inexpensively test the performance of hearing protection.  This fit testing technology is a huge advancement in efforts to save workers’ hearing.

HPD fit-testing is not a new concept, and several fit-testing systems have been developed over the past decade.  However, until now, limitations of fit-testing technology have made it impractical to implement on-the-job.   Commercially-available systems require expensive specialized equipment and can take as long as 30 minutes to complete a test.  For many employers, these barriers prohibit widespread implementation of fit-testing at their jobsite.  Furthermore, some systems can only test certain HPDs or require specially-modified hearing protectors.  NIOSH developed the HPD Well-Fit™ fit-testing system specifically to address these technical limitations and provide a feasible method to obtain measures of earplug performance in the workplace.  HPD Well-FitTM utilizes technology that is built into just about every computer sold today, requires only 4-7 minutes to measure HPD performance, and can be used with any earplug.

Using the computer’s mouse as the input device and a high-definition audio output board, HPD Well-FitTM generates the sounds required to fit-test a worker’s hearing protector with the addition of sound-isolating headphones.  The speed of the test makes it feasible to re-train and re-test the worker until mastery in fitting the protector has been achieved.  HPD Well-FitTM incorporates PC-based video training especially developed by NIOSH for this purpose.  This training has been proven to be both very quick and effective.   The Personal Attenuation Rating (PAR), a measurement of a hearing protector’s ability to reduce noise for an individual, is calculated using a unique algorithm developed by NIOSH scientists.  As a result, HPD Well-FitTM makes it possible to quantify an individual’s noise exposure and ensure that it is safe, rather than relying on best guesses based on noise measurements and a general estimate of earplug attenuation.  The impact of this capability on worker hearing health cannot be overstated, and recently won HPD Well-FitTM the NIOSH Bullard-Sherwood Award for Research to Practice.

HPD Well-FitTM has been tested in several field and laboratory studies.  In February 2012, HPD Well-FitTM was used to assess the protection of inspectors and engineers responsible for off-shore oil drilling rigs in the Gulf of Mexico.  These workers were exposed to noise levels of 110 dB(A) on a regular basis as they flew to and from the off-shore platforms in helicopters.  Fit-testing was completed for 74 workers at four regional offices in the course of two days.  Workers who did not achieve a PAR of at least 25 dB (sufficient to reduce their exposure to the NIOSH recommended exposure limit of 85 dB[A]) were reinstructed or refit with a different hearing protector to help them achieve an appropriate protection level .  As Figure 1 shows, 92% of the workers were able to achieve the 25-dB PAR.  Due to time constraints, it was not always feasible to hold the workers after their assigned shifts and some that were close to the 25-dB PAR were not retested. 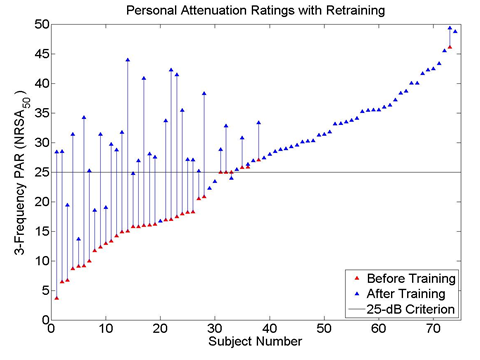 In a second field study, workers that perform sandblasting operations for the Grand Coulee Dam were fit-tested using HPD Well-FitTM.  The sandblasters’ A-weighted time-weighted average exposures were as high as 118 dBA.  With sandblasting activities having durations of up to two hours, there was concern that some workers’ hearing protectors may not have provided adequate protection.  Using HPD Well-FitTM, NIOSH demonstrated that the workers received 30 dB or more attenuation from their protectors. Armed with this information, it was possible to conclude that workers’ exposures did not exceed either the OSHA Permissible Exposure Limit or the NIOSH recommended exposure limit.  Furthermore, five workers involved with sandblasting were fit-tested before and after a work shift to demonstrate that the hearing protection was not shifting during their work.  The second figure illustrates the overall attenuations before and after a work shift and the change in attenuation between the two measurements.

NIOSH has licensed HPD Well-FitTM to Michael and Associates which markets it as FitCheck Solo.  Custom Protect Ear and Moldex also offer Fit Check Solo*§.   NIOSH is working closely with HPD manufacturers, universities, professional associations, and testing laboratories to further develop and standardize HPD fit-testing technologies.  In the coming year, we expect to complete an American National Standard for qualifying the performance of fit-test systems.  This standard will ensure that all systems meet minimum standards for measuring hearing protector attenuation and calculate a PAR in a uniform way.  Rather than relying on the noise reduction rating posted on hearing protector packaging, workers and consumers can now measure the fit of their personal protectors.  The future for hearing protection is fit-testing.

CAPT Murphy is a physicist and is co-leader of the Hearing Loss Prevention Team in the NIOSH Division of Applied Research and Technology. CAPT Murphy is an officer in the Commissioned Corps of the U.S. Public Health Service.

CAPT Byrne is a research audiologist in the Hearing Loss Prevention Team in the NIOSH Division of Applied Research and Technology. CAPT Byrne is an officer in the Commissioned Corps of the U.S. Public Health Service.

Miss Christa L. Themann is a research audiologist in the Hearing Loss Prevention Team in the NIOSH Division of Applied Research and Technology.

*References to products or services do not constitute an endorsement by NIOSH or the U.S. government.

11 comments on “NIOSH HPD Well-Fit™: The Future is Fit-Testing”

How much does the Well-Fit cost?

HPD Well-Fit is commercially available from Michael and Associates http://www.michaelassociates.com/ Please contact them for pricing information.

While I think that this sort of personalised testing is an excellent idea we need to know whether the results can be ascribed to the Well-Fit test itself.

The results could be simply a generalised training effect that could be achieved by almost any sort of intervention and not specifically by the Well-Fit test.

Did any of the field trials mentioned in the blog have a control group that only received training without the fit-testing, and if so are there are any published peer-reviewed papers on this?

good one but can you please tell me something more about the cost and few more things really a great approach !

Thank you for your comment. An approximate initial investment for a commercial fit-test system for hearing protectors is about $3000. Depending upon the system that is purchased, there are also consumables that will add to the cost. At NIOSH, we have purchased several commercially available systems for testing and the prices have ranged from about $2500 to $3800. Systems are continually being upgraded and pricing will change.

Other fit-test options that have not been fully investigated are web-based or native apps for mobile devices to conduct fit-testing. NIOSH has developed an iOS version of HPD Well-Fit as well as an HTML-5 implementation as a research tool. The iOS app worked well, but given that NIOSH is a research institute and not a commercial app developer, we have determined not to pursue commercialization of the iOS app given the lack of a funding model to maintain the app. A web-based application, such as the HTML-5 implementation, may prove to be useful. However, the user should be aware of the effect on attenuation when choosing headphones, testing room and the device (desktop, laptop or mobile). To my knowledge none of the web-based or native applications for mobile devices have been rigorously compared to a laboratory fit-test system.

I have used the Fit-Check for the last 10 years and along with in-the-ear dosimetry (ITED)* technology have been able make a significant reduction in the number of hearing shifts at our location. The personal attenuation data provides an excellent opportunity to train employees on why they need to wear a specific style of HPD’s.

There are several commercial systems on the market for fit testing. Has there been any kind of independent review of available systems that might aid in the selection of one for use? My impression is that these are non-regulated devices. Can they be certified or calibrated for accuracy?

Fit-test systems are currently unregulated. NIOSH conducted a comparison of three fit-testing systems tested at four laboratories: NIOSH, Michael & Associates, Honeywell and US Army Aeromedical Laboratory. We reported the result of the study at the NHCA conference in Las Vegas (2014) for the first 3 labs, and then again in November 2015 at the 170th meeting of the Acoustical Society of America held in Jacksonville FL. We have also drafted an article for publication and submitted it to the Journal of Occupational and Environmental Hygiene, which is currently in peer review and we hope will be published soon. The systems tested were the NIOSH HPD Well-Fit™ , Honeywell VeriPRO, and Michael & Associates FitCheck. HPD Well-Fit and FitCheck exhibited about +- 2 dB agreement with the laboratory sound-field system. The VeriPRO underestimated the sound field attenuations and had a larger error.

3M has conducted a test of the performance of the EARFit hearing protector validation system. Two papers have been published by Jeremie Voix, Jan Pienkowski and Aidan Delnavaz from E’cole de Technologie Supe’rieure (ETS) and another paper by Nicolas Trompette and Alain Kusy from the Institut National de Rechearche et de Securite’ (INRS). The ETS report was a contracted report from 3M to evaluate the EARFit system. The INRS paper was a proceedings paper from the 2013 InterNoise Conference held in Innsbruck Austria The EARFit system exhibited good agreement with the laboratory sound field method.

Several other fit-test systems are available both in the U.S. and in Europe. I am unaware of validation tests performed with these other systems.

What COTS system do you use? What is available today?

To me the objective answer to this issue insertion loss measurements using a microphone instead of the subject’s input.