The World Day of Remembrance for Road Traffic Victims takes place every third Sunday in November. It serves as a way to:

The United Nations (UN) recognizes the need for action. In 2010, a UN General Assembly resolution proclaimed the Decade of Action for Road Safety (2011–2020) with the aim of saving millions of lives by improving the safety of roads and vehicles, enhancing safe behavior of road users, and improving emergency services. In 2016, the 17 Sustainable Development Goals (SDGs) to transform our world officially came into effect. The SDGs contain two targets specific to reducing road traffic injuries and increasing road safety (3.6 and 11.2).

The Road to Zero (RTZ) Coalition, launched in 2016, has the goal of ending fatalities on the nation’s roads by 2050. CDC has actively participated in the coalition and currently serves on the Steering Group.

The RTZ Coalition has described three interrelated approaches that are needed to achieve zero deaths: 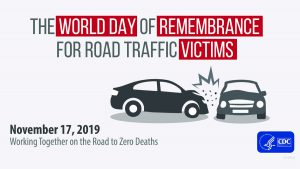 No one can forget the devastation caused by a lost life, especially when, in most cases, it can be prevented. Everyone can join us today on the road to zero by taking steps to be safe on the roads at home or abroad. Remember to do the following: