In 2014, WHO South-East Asia Region (SEAR) became the fourth region, among WHO’s six regions, to be certified as having interrupted all wild polio virus (WPV) circulation. India was the last country to eliminate polio in SEAR, proving that polio could be eradicated in the most challenging settings. Multiple international partners collaborated with Government of India, and CDC played a big role supporting the efforts to eliminate polio in SEAR.

In 2006, without any previous experience but inspired by Bob Keegan, CDC Global Immunization Director at the time , I jumped at the opportunity to contribute to monitoring immunization activities in India while getting a good understanding of what was involved to reaching every child, village and town in the most challenging areas of Uttar Pradesh.

Once in India, I joined state and local teams in Barelly District, learning from those leading polio elimination operations on the ground. Accompanied by an enthusiastic translator, I experienced firsthand the joy of vaccinating children, getting to know the challenges of working in rural and in highly populated urban areas, where people lived in extreme poverty with poor sanitation. I participated in different vaccination strategies such as routine immunization (RI) and supplemental immunization activities (SIAs). Mostly I admired the great level of organization, and the commitment and the dedication of the state and local polio eradication teams. Polio teams were everywhere, wearing their vests and holding their vaccine carriers, knocking at every door, vaccinating at bus stops and train stations and important road intersections. Vaccinators worked in markets, trains, buses, at brick kilns, and at construction sites. 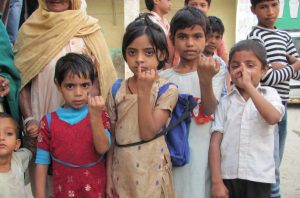 After being in Uttar Pradesh for a few weeks, I traveled with a team by road to one of the Blocks in Bareilly, where we reached a small village. While still in the car, we saw mothers hurriedly reaching for their children and disappearing from view. In the center of the village, we got out of the car, and only saw one man, holding a young baby girl in his arms. We approached the man, and through the translator, found out that people were hiding from vaccinators, because they were told that they had to pay for vaccines. I told the chief that the team would check the children’s vaccine finger marking and offer free vaccines to every child under five.

The man holding the child identified himself as the village chief and said it was not a good idea to walk around the village. The chief was concerned about vaccines not being safe and causing sterilization. To demonstrate to the chief that the vaccine was safe, our CDC colleague poured vaccine drops into his own mouth. The chief was surprised, and yet again, not fully convinced. Then he asked one more question to the polio team – why do children need so many rounds of polio vaccination? At the time, the question was still in the air, a village child wearing just a shirt, and no pants or underwear, stopped nearby, squatted and let go full fledge diarrhea in plain sight. What better way to explain to the chief why children need to receive several rounds of vaccinations? We explained that as in the case of that little boy, had he been vaccinated a few hours before, since he had diarrhea, the vaccine would have no effect, because for the vaccine to work it needed to stay in a child’s gut for multiple days to protect him from polio.

The chief then drew a circle in the air. All of the sudden the villagers came out from their hiding places and lined up to be vaccinated. The village chief told the team that we could check the children’s finger markings and vaccinate. We began vaccinating the children. When we finished, I asked the chief to vaccinate the little girl he was holding on his arms. The chief hesitated, so our colleague asked him how he would feel if she were to get sick from polio and could not walk. The chief tenderly looked at the little girl, his granddaughter, and allowed us to vaccinate her.

Mission accomplished. We thanked the chief, got back into the car and headed back. On the way to the city, we talked about our experience in the village and agreed we had for the first time dealt with vaccine trust issues in a community.  We were happy that we were able to gain the chief’s confidence and protect a whole village from polio.