Climate change is any significant variation in temperature, precipitation, wind, or other type of weather that lasts for decades or longer.

World Environment Day is celebrated every year on June 5 to raise global awareness to take positive environmental action to protect nature and the planet Earth. It is run by the United Nations Environment Programme. Read the story below about the effects climate change on Pacific Islanders:

Pristine waters, lush vegetation, picturesque landscapes, remote location….. This sounds like the stuff of travel guides—words that conjure up images of a vacationer’s paradise. But these alluring descriptors aren’t about “Fantasy Island.” Think Pacific Islands—the focus of a unique NCEH photojournalism project studying the effects of climate change. The project focused on the Republic of Palau and aimed to raise global awareness of the public health effects of climate change on all Pacific Islanders.

Impact of Climate Change on the People of Palau

A team of three journalism students, their instructor, and a CDC public health advisor travelled to Palau to work directly with the Ministry of Health. The team interviewed a broad range of residents—including government officials, traditional leaders, fishermen, gardeners, doctors, and scientists—to explore their experiences and perspectives concerning climate change.

The team took thousands of pictures documenting the locally identified effects of climate change. These effects may have had direct or indirect public health results for the people of Palau. Some of these effects include

The greatest impact to the people of Palau at this time may be the risk of not having enough food and water because of salt-water inundation. Salt-water inundation and flooding damage crops and can disrupt the fresh water aquifer.

Particularly in outer islands in the Pacific where the populations depend on local sources for food and water, the results are severe and relatively long lasting. For example, fields that are damaged by salt water can take several years to become productive again for growing crops.

Listen to an interview with Palau’s Prime Minister of Health, Dr. Stevenson Kuartei 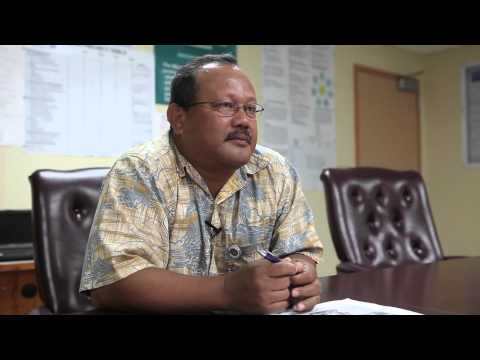 In addition to the pictures they took, the team also put together a book entitled, The Public Health Impacts of Climate Change in Palau. In May 2012, Southern Illinois University, Carbondale, published 1,000 copies of the book. They distributed the books to the Palau Ministry of Health. The book aims to

Learn More
The changing climate endangers human health. Learn what CDC is doing to prevent and adapt to the possible health effects of climate change.

Visit the Southern Illinois University for more information on the effects of climate change in Palau.