The News on Cancer Deaths in the United States: Good, Bad, and Fantastic 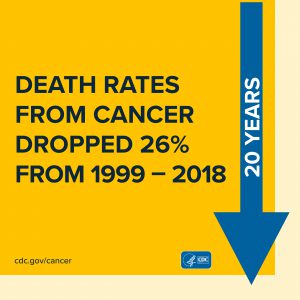 We continue to see declines in the rate of cancer deaths (the number of people who die from cancer for every 100,000 people).

The three biggest keys to lowering cancer death rates are:

Although cancer deaths are going down, people still do die from cancer. In 2018, just shy of 600,000 people died from cancer, including about 1,200 children under 15 and 9,200 young people between ages 15 and 39. We still lose too many people to cancers that are often thought of as highly curable. In 2018 alone, more than 42,000 women died from breast cancer and 31,000 men died from prostate cancer. Too often, people die after enduring years of brutal therapy.

We remember all those who have died from cancer and the friends and family who love and miss them. It’s time to “wipe our tears away [and] put science to work” so that even fewer people suffer from cancer.

Lung Cancer Is Still the Top Cause of Cancer Death, But There’s Hope

While lung cancer still claims more lives than any other type of cancer, death rates have dropped 37% in 20 years (from 1999 to 2018), showing the tremendous success of tobacco control. In 1964, when the first Surgeon General’s report on the health consequences of smoking was published, 42% of adults smoked. This has dropped to 14%, and about two-thirds of them want to quit. 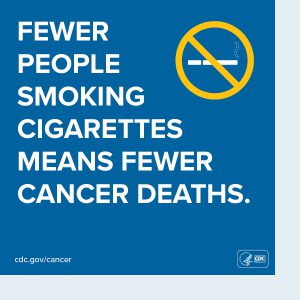 This year’s Annual Report to the Nation on the Status of Cancer found that tobacco use causes stark disparities in health outcomes. For example, surveys show that 20% of adults in small towns smoke compared to 13% in cities. In 2018, the lung cancer death rate was 30% higher in small towns than in cities.

Breakthroughs in treatment can now pinpoint a patient’s exact type of lung cancer, allowing doctors to personalize their treatment for the best chance of success.

More people are living beyond cancer than ever before. In the past 15 years, 11 million people were told they have cancer and are still alive today.

CDC works with agencies and organizations across the country to find ways to prevent people from getting cancer. And we work with states to keep track of the number of people who get and die from cancer, to find out if those ideas work. Together, we can go beyond reducing the number of people who die from cancer—to stop people from ever getting cancer at all.

5 comments on “The News on Cancer Deaths in the United States: Good, Bad, and Fantastic”

I lost my mother to aggressive lung cancer. Her parents died with it. Now I am so afraid of getting it. My sister has already had it.

I am happy to hear the good news.
Ref: Linda (a. simulation) I am ok with most of the problem resolution
programs, except “EXCESS PHYSICAL ACTIVITY” being handicapped
(physically, with polio and a fracture fixed but problem of wheel-chair
requirement, exists).

With compliments and thanks for a nice email-notification) ; to update,
the state-of -the art in Medical Oncology, which I have had experience in
the past, with work on Leukemia Research, Hematological malignancies,
limited exp. with Solid tumors…including work in USA and India.

Does diet play a role in cancer?Plantbased diet is promoted but a lot of vegetarians have cancer. plantbased protein is not complete nutrition so I am really confused.Drop in cancer rates is because of early detection and treatment .what about cancer prevention as apublic health graduate from Emory I feel prevention campaign is very important.

Thank You so much for The GREAT information!!! Since I signed up for the CDC Newsletters to be emailed to me it is ONE of the BEST gifts I have given to myself and I Thank God for the information everyday. Very Informative,and easy to understand.

My father had bladder cancer two years ago and refuses to do a new check by COVID, how can he be convinced to go to the hospital?